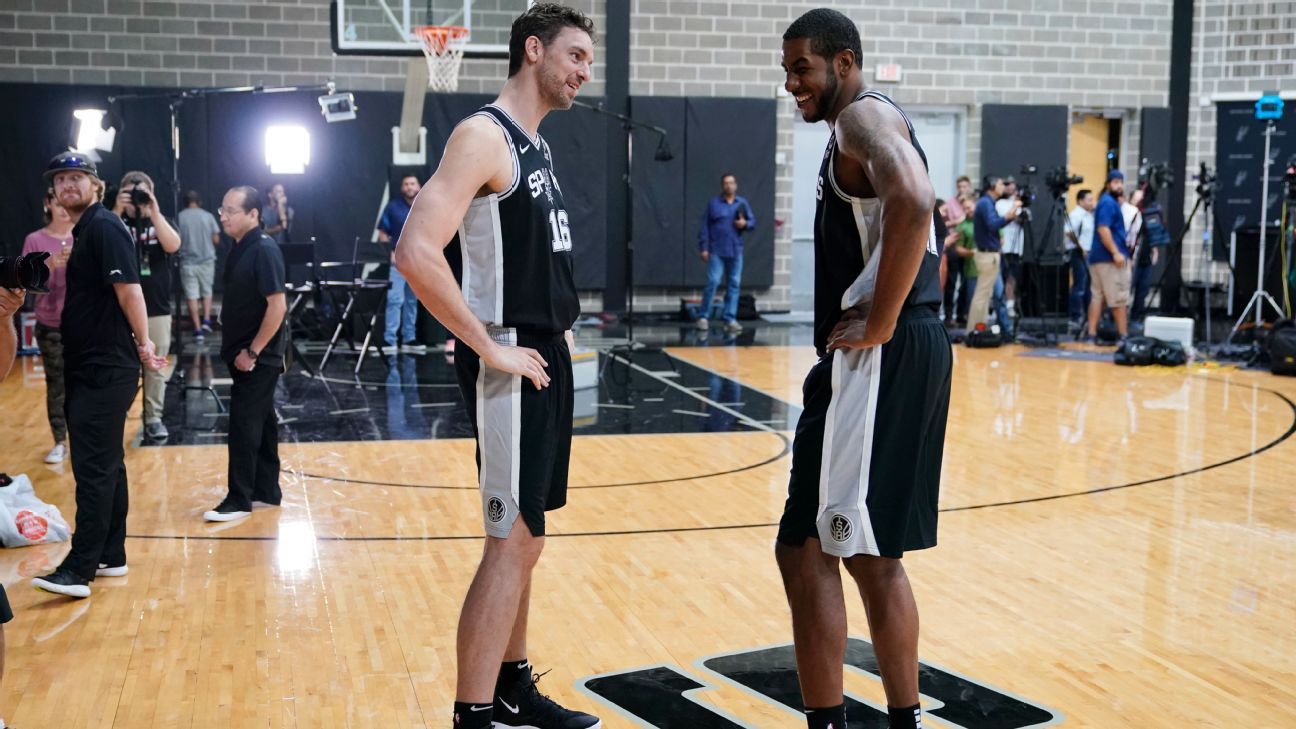 SAN ANTONIO — The San Antonio Spurs opened training camp Monday for the first time since the 1997-98 season without a single member of the Big Three comprising Tim Duncan, Tony Parker and Manu Ginobili.

Still, the day’s most notable absence was Kawhi Leonard, which provided a welcome respite from the drama that plagued the team last season and ultimately led to the two-time Defensive Player of the Year being traded to Toronto in July for four-time All-Star DeMar DeRozan.

“I was glad it was over,” point guard Dejounte Murray said. “Everywhere I went, I couldn’t really go anywhere [without] everybody asking me. Just all the drama, and the Spurs aren’t used to drama. So it was weird for everybody in the world. It was a lot. Everywhere we went, you’d see on ESPN or First Take: ‘Kawhi-Spurs, Kawhi-Spurs.’ It was a lot of drama. We’re just glad it’s over with, and we get to go into training camp with no drama, new guys, exciting guys. This is going to be a fun year.”

The relationship between Leonard and the Spurs deteriorated last season over treatment of his quadriceps injury. He reportedly felt that the team mishandled it and then didn’t support him when he said he couldn’t play. Leonard ultimately sought treatment outside of the organization, and the distance between the parties grew.

The Spurs traded the disgruntled Leonard in July along with Danny Green to the Toronto Raptors for DeRozan, Jakob Poeltl and a protected 2019 first-round pick. Meanwhile, Parker opted to sign with the Charlotte Hornets in free agency, and Ginobili announced his retirement in August after 16 seasons in San Antonio.

“I wasn’t even going to talk about it,” power forward LaMarcus Aldridge said when asked whether he was happy to see the drama from the Leonard saga finally come to conclusion. “It’s gone now. If you’re going to ask questions about that whole thing, I’m not going to answer them. We’re happy to turn the page. DeMar is here. He’s happy and he’s motivated. I played in open gym with him. He’s going to make us better. You’ve got to look forward. We have a very talented team I’m looking forward to playing with.”

When the club opened camp at its facilities Monday, Spurs coach Gregg Popovich confessed, “I really don’t know all the names” of the players. After all, eighth-year Spurs reserve Patty Mills is currently the franchise’s longest-tenured player.

Eleven of the players on San Antonio’s current 19-player roster entered camp with two years or fewer of experience.

Popovich described opening camp with such a retooled roster sans Duncan, Parker and Ginobili as “a little melancholy,” but he expressed excitement about the future.

“At the same time, it’s a great opportunity for a new challenge and new energy, a different route, different perspective,” he said. “Seeing all the new faces that you have to try to put together, it will make it an interesting, challenging year, but in a good way.”

Popovich’s season could not have been more difficult. While the Leonard turmoil dragged on, Popovich’s wife, Erin, died in April at age 67 after a long illness. Popovich stepped away from the team for the final three games of San Antonio’s first-round playoff loss to the Warriors. Some wondered if the 70-year-old would return for a 23rd season with the Spurs. But he was there Monday, embracing changes with the team.

Aldridge described the current incarnation of the Spurs as “more talented” than last season’s squad, which featured Leonard for just nine games as he recovered from a quadriceps injury. Aldridge pointed to bench depth and the club’s versatility in making his evaluation.

“Our bench got way better,” Aldridge said. “We definitely are going to miss some guys who made us better. But we have guys who can make plays and just play, and we have some young talent that is going to make some plays for us too. We can play both [big and small]. That’s why I said we’re so talented. We have Pau [Gasol] that can play 5. We have the young fella from Toronto [Poeltl] that can play 5. Then we can go small and I’m at 5 and Rudy [Gay is] at 4. I feel like we got more talented because we can go small ball easier, and we can play big with a big team. I feel like we’re at that happy medium where we can do both things.”

Aldridge considered last season to be San Antonio’s rebuilding season due to the absence of Leonard, and the drama accompanying that situation, in addition to the team finally opting to go with Murray over Parker at point guard full time. This season feels to Aldridge like “more of a transition year” for the Spurs.

The Spurs won 47 games last season with Leonard largely out of the picture.

“We’d just like to build from that,” Popovich said. “We’re adding a talent like DeMar that we didn’t have last year. We’re excited about it. The goal will be the same, as it has been every year. We want to be the best team we can be when the playoffs roll around.”

As for Leonard, the Spurs continue to wish the former face of the franchise the best.

“As long as Kawhi is happy, that’s my guy for life,” Murray said. “I don’t care about what happened between him and the Spurs. It’s got nothing to do with me. It’s bigger than basketball. We got a great player. Toronto got a great player. Let’s just go from there.”

Spurs Feel Some Relief With Absence Of Kawhi Leonard Drama

Spurs Feel Some Relief With Absence Of Kawhi Leonard Drama