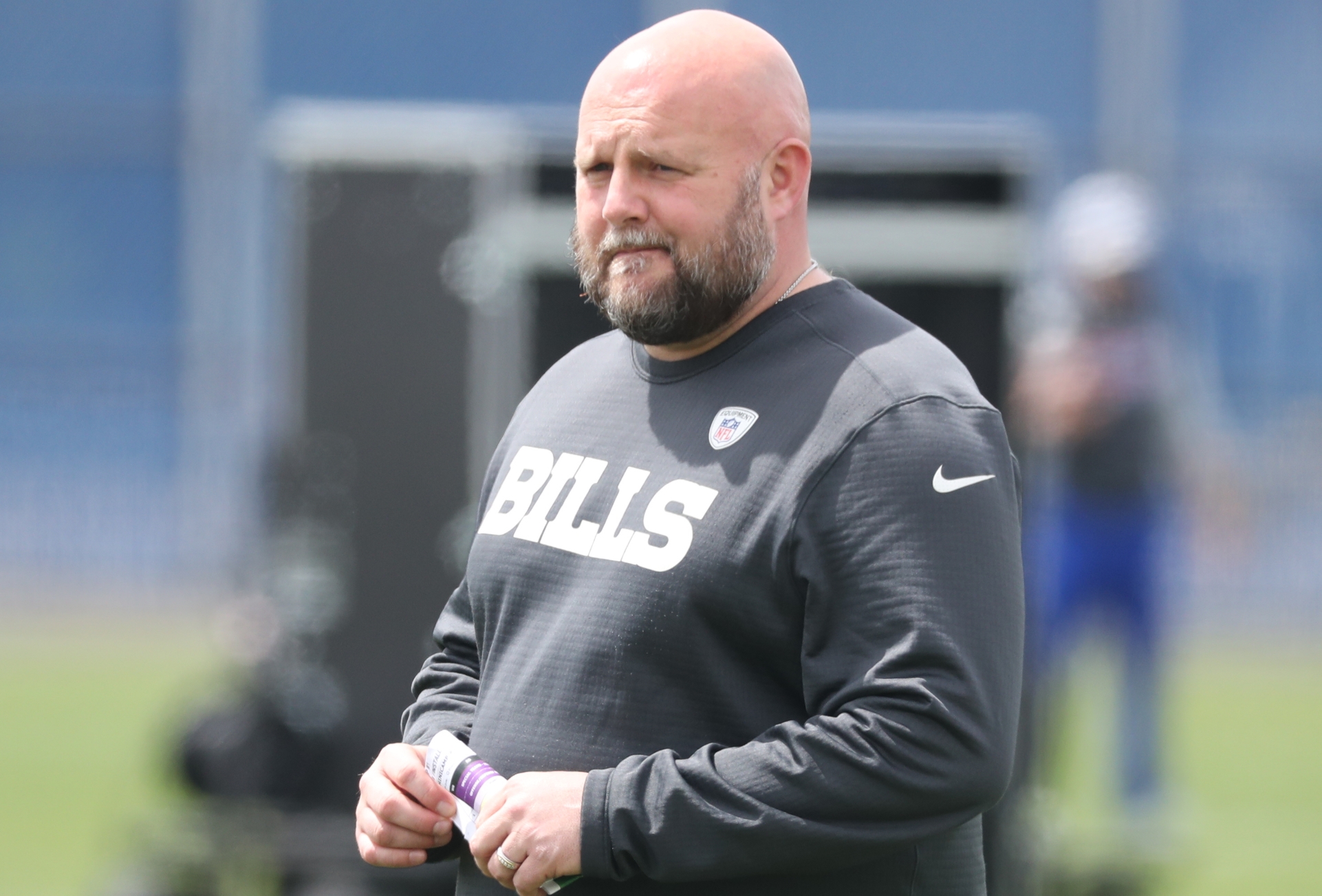 Admittedly, the bar is low when it comes to preseason openers, but that was a solid showing from the Bills’ offense on Thursday night.

For what it’s worth, I thought Josh Allen played a better game than social media would have you believe. There are a lot of “analysts” out there who seem to have a big interest in Allen failing to justify their scouting reports of him before the draft. On to this week’s mailbag …

Jay: Creativity. The Bills use a dizzying array of substitutions and pre-snap motion. According to charting done by The News’ Mark Gaughan on Thursday night, Daboll used pre-snap motion on nine of their first 12 plays. The offense is centered around trying to find mismatches, and then exploiting those. Another change is the use of the middle of the field. That was not a strength of former starting quarterback Tyrod Taylor, but it looks like it will be a big part of this year’s offense. One other difference is the amount of quick passes, whether those be throws in the flat to running backs or bubble screens to receivers. That’s long been a staple of the New England passing attack, which Daboll of course knows well. It’s only one game, and it’s only the preseason, but there were reasons to be encouraged about what the offense showed Thursday.

Brendan Sweet asks: Who was the most surprising player in the game? Who was the biggest disappointment? Unrelated, who is winning the PGA Championship this weekend?

Jay: Nathan Peterman is an easy choice for the first one. Getting the start was at least a mild surprise in itself, but seeing Peterman complete his first seven passes on Buffalo’s opening drive, capping it with a 28-yard dime to Kelvin Benjamin for a touchdown, was something few would have predicted. Peterman deserves credit for putting his nightmare rookie season behind him and putting up a good fight for the starting job this year.

The biggest disappointment for me was rookie undrafted wide receiver Robert Foster. He was one of my sleepers for the 53-man roster early in training camp, but has fallen off considerably from that point. Josh Allen’s bomb to Foster on the first play of the third quarter was a little too close to the sideline, but Foster didn’t show good field awareness in tracking the ball by drifting out of bounds. There was also a miscommunication between Foster and Allen, and another deep throw in which it looked like Foster briefly slowed up before realizing he might have a step deep. Allen’s throw missed by a yard or two – maybe that doesn’t happen if Foster keeps running. At this point, I’d be shocked if he made the 53-man roster.

As for the PGA, my four picks in Gaughan’s golf pool are Partick Cantlay, Brooks Koepka, Rafa Cabrera Bello and Tony Finau. If the winner comes out of that group, I’ve got a good chance at the overall title for the year. That said, nobody is hotter on the planet right now than Francesco Molinari, and it just feels like Rickie Fowler is ready to break through in a major. They are two solid choices.

JW Mills asks: Brandon Reilly going to finally take a starting spot? Looked great from my seat on the 40 behind the Bills’ bench when he caught that pass and made good run yardage.

Jay: I’d stop short of saying he’s going to take a starting spot, but think he’s right on the 53-man roster bubble. One thing that helped him Thursday night, outside of the long reception, was a nice coverage play he made on a kickoff return. In what will be a close battle for roster spots at receiver, that’s the type of thing the coaching staff will look for. I’ve got more on the wide receiver competition in this week’s Inside the Bills.

Tom Zaccardo asks: Why are the Bills so “up” on Peterman? His performance last night was ok – it was a high school game plan for him – three-step throws. AJ McCarron is much more polished and Josh Allen, his physical talents are off the chart.

Jay: Teams like the guys they draft. That’s the easiest way to explain it. I agree that the Bills have stood by Peterman more than other teams might after the meltdown he had last season as a rookie, but coach Sean McDermott has been consistent in saying that’s not the player Peterman truly is. I’m not going to knock his performance Thursday in any way. Sure, he’s running a watered-down offense, but that’s every team in the preseason, offensively and defensively. He executed the plays that were called well. The same is true of McCarron, who deserves to start in Week 2 against Cleveland. My takeaway from Allen was basically what it’s been throughout training camp. He made some throws the other two simply can’t – the touchdown to Ray-Ray McCloud was ridiculous – but also got away with an ill-advised throw on fourth down that probably should have been intercepted.

Rick McGuire asks: The starting O-line that played with Nate Peterman played outstanding. The line with AJ McCarron played well too, even with the one sack. Josh Allen wasn’t afforded the same luxury. Will we be seeing him start any of the remaining three games so we can see him with better protection?

Brian Wisniewski asks: The O-line had two units playing decent to good. Do they seem the as interchangeable? Will we see AJ with the same unit when he starts?

James W. Porter Jr. asks: How do you think Josh Allen did? I was impressed. I thought Foster should have had the third-and-22 pass, and the very next one. The third-string offensed didn’t do him any favors, either.

Jay: I don’t see any way the quarterback rotation changes after Thursday night. Both Peterman and McCarron played well enough to keep it the same. As I mentioned above, McCarron should get the start against Cleveland. That’s not a knock against Allen, who did suffer from two breakdowns in protection and also saw his receivers drop a pair of accurate passes. I don’t see Allen getting a start in any of the remaining preseason games, meaning I expect him to be on the bench when the regular season starts. That doesn’t mean he can’t or won’t become the team’s franchise passer. It just means that the coaching staff feels like he would benefit from learning more in practice and from the sidelines.

To Brian’s question, I don’t see the top two units as being interchangeable, outside of the center competition between Ryan Groy and Russell Bodine. In fact, there has been a decent amount of shuffling between the second and third units.

Nick Spodaddy asks: Do you think Ray-Ray gets an expanded look after tonight, or does Corey Coleman being here make the uphill climb steeper?

Jay: The acquisition of Coleman definitely makes things harder for the other receivers. You have to think Coleman is going to be on the roster after the team traded an asset to acquire him, albeit a minimal one at that in the form of a 2020 seventh-round draft pick. McCloud helped himself a good deal Thursday. My untrained eye hasn’t been all that impressed with him during training camp, but he did some good things in a game setting. In general, teams don’t like cutting their draft picks, so McCloud will get every opportunity to show he belongs. I wouldn’t be surprised if that means some plays with at least the second team next week.

Jay: It’s a possibility, but the more likely scenario in my mind is Murphy supplanting Travaris Cadet as the third running back. Ivory is a different style of runner, and he figures to be the change-of-pace option. Murphy has looked solid so far, and is definitely making a push for the 53-man roster.

Brent Thorman asks: How did you think Kelvin Benjamin looked? He looked refreshed and healthy to me.

Jay: Agreed. That was exactly the type of performance the Bills hope they will get all season from Benjamin, who is far and away the No. 1 receiver on the roster. If he can put together a 1,000-yard campaign, it will be mutually beneficial for the Bills and for Benjamin, who is in a contract year. The knee injury from last year is behind him, and if he can stay healthy he’ll get the targets to have a big year.

Liam Canadian asks: Back to the golf course.

Jay: This isn’t a question, but it sounds like a terrific idea. Thanks for the questions this week. And Liam, thank you for the comment. I know how much you love the mailbag!

Jay Skurski's Bills Mailbag: What A Difference A Year Makes For The Offense

Jay Skurski's Bills Mailbag: What A Difference A Year Makes For The Offense